“We are a Supply Nation Registered Company – Commitment, ownership and responsibility are disciplines that we carry with us each and every time to ensure a job is followed through to completion.”

Wurrba offers a range of high quality services that work together to offer you peace of mind. There’s no

need to try and organise all the parts yourself; leave it to us and let our team take care of the whole

project from start to finish. We’re not just tradies, we’re experienced project managers and can take the hassle of managing a large project off your hands. From project planning right through to evaluation and managing rectifications, we’ve got you covered. Born and bred Territorian Raphael Clarke is best known for his 9-year stint with the St Kilda Football Club and representing the Indigenous All-Stars in 2009. Knowing that a career in football wouldn’t last forever, in his final two years at St Kilda, Raphael commenced a parttime building and carpentry apprenticeship.

Now back home in the Territory, Raphael is a qualified carpenter and Director of Wurrba and has previously worked as a project manager for large corporations delivering large scale projects.

He maintains strong cultural connections to both Larrakia people and land through his mother who is a current Elder of the Marri Amu and Marri Tjevin people. 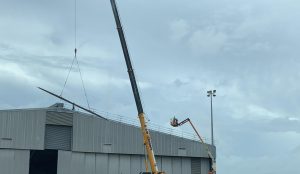 With our expertise and service capability combined It means we can offer a bigger and better service to our clients.